The aviation industry is one of the least-balanced when it comes to gender, especially at the technical skills and top leadership level. Often, women are under-represented in many areas of aviation, with the largest gaps in technical, operations and leadership positions. Women account for just about 5% of professional pilots and 3% of airline CEOs around the world according to the International Society of Women Airline Pilots (ISWAP). A 2018 IATA global survey affirmed that women CEOs in aviation represent only 3% compared to 12% of women CEOs in other industries. The survey ranks Africa in third place alongside South America with 8% of executive roles held by women (see graph below).

While the gender in-balance cuts across all regions, the situation seems to be improving across the board. In Africa, the industry boasts of about 5 women CEOs in airlines and 3 Director Generals of Civil Aviation Authorities. In the cockpit and technical areas however, the numbers in Africa remain as depressed as elsewhere. Some airlines are however making better progress at recruiting women pilots and technicians. Ethiopian Airlines has over 30 female pilots, 6 of them captains while Kenya airways has 31 female pilots representing 8% of the cockpit crew. It is however alleged that women have to work themselves much harder than their male counterparts to prove they are just as capable.

It is important to note that gender equality is not just about the large and obvious disparity in the absolute numbers of men versus women at the workplace. In line with the UN Universal Declaration of Human Rights, it also entails non-discrimination, guaranteeing equal pay for equal work and merit-based promotion. 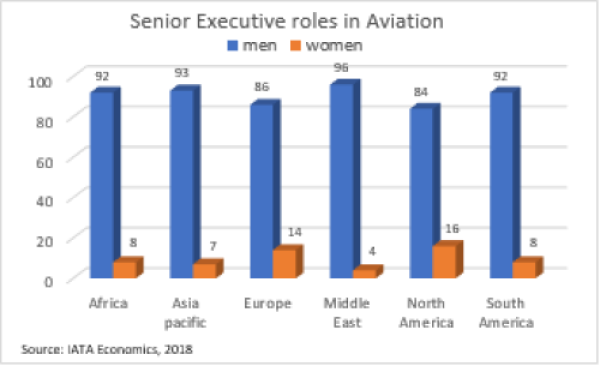 With these skewed statistics, aviation remains one of the professions where gender equality is far from being realized. Whether by design or default, the majority of women working in the air transport industry are cabin or ground crew, customer service personnel and receptionists. On the contrary, men dominate in the cockpit, engineering, technical and managerial areas.

The origin of pilots from the military, where women were excluded for several decades coupled with the reluctance of some airlines to recruit women pilots are two historic reasons for the low number of women in the cockpit. In addition, the difficulty of combining family life and professional life for technical and C-level women in aviation can be daunting, not to mention the regular rigorous professional training for cockpit crew.

While the above may just be excuses today, the real obstacle is lack of awareness. Many women and girls may not be aware of the career opportunities open to them in aviation. Indeed, fewer women pursue STEM-based courses in school thus limiting their chances during cadet recruitment for technical jobs.

It is also undeniable that aspiring female leaders often face bias and stereotyping when vying for positions. For instance, while compassion and empathy are typically viewed as feminine traits, competitiveness, assertiveness and confidence are often associated with men. Female leaders that exhibit some of the “assumed” male traits are often viewed unfavourably. But probably most important, is the inadequate female role models at the highest corporate level to provide the coaching and grooming future female leaders need.

In light of the importance of the subject of gender equity in aviation, the African Airlines Association (AFRAA), in partnership with Collins Aerospace staged a 2-day conference on 19-20 October 2021. The objective of the conference was to facilitate dialogue, share information, experiences and best practices to attain gender diversity and youth development in aviation. The conference was held in virtual format under the theme: “Women and Youth Development in Aviation for a Sustainable Future”. The conference provided an ideal forum for air transport industry stakeholders to take stock of the trends, deliberate on feasible solutions to bridge the gender gap and develop young aviation professionals for the sustainability of the air transport sector.

The need to improve gender balance in aviation is not new. In 2016, ICAO sent out a strong signal in favor of gender equality in the aviation sector by adopting Assembly Resolution A39-30, comprising a programme of tangible gender equality measures. ICAO underscored the need for gender parity in order to make aviation more efficient and enable it better cope with the rapid expansion. According to the former Secretary-General of the ICAO, Dr. Fang Liu, “Air transport must address head-on why women are still under-represented in the majority of the technical and executive positions in aviation.” One renowned leader of Africa aviation, Dr. Harold Demuren (former DG NCAA) once remarked that, Africa aviation could address part of its brain drain challenge by employing more women to technical and managerial positions. In his view, while women tend to be stable at the workplace for longer, men keep chasing greener pasture to wherever they can find it.

In keeping with the saying that “if you want to bring change, be the change,” IATA in 2019 launched 25by2025, a laudable voluntary industry-wide initiative, focused on improving female representation to  25% by the year 2025 in both technical and managerial levels in the industry. This initiative re-ignites the debate on women’s role in aviation and the need to provide them with opportunities to bring out their full potential. IATA has committed to monitor, track and report the progress towards achieving this goal.

AFRAA-Collins Aerospace conference on Women and Youth Development in Aviation for a Sustainable Future made the following call to action to the industry to bridge the gender diversity gap:

What should women do at an individual level?

To effectively position themselves for more senior roles, women should adopt some important habits used by men to raise their profile and get ahead. One of the most important steps aspiring women leaders should adopt is to put themselves forward for challenging roles which they may not feel completely competent to assume or well-prepared for. They should proactively manage their careers by mapping out their long-term aspirations and goals and volunteering themselves to more challenge roles rather than wait to be assigned. They must know that communicating the value they bring to the company and actively advocating for themselves is key in a career build-up to the C-suite.

Where they exist, women should take advantage of formal gender diversity programmes within the company and endeavor to build personal networks of advisers within and outside the organisation. Joining networking associations that promote the advancement of women in the aviation is important. Organisations such as the International Aviation Women’s Association; Women in Aviation Africa and Ninety-Nines (a female pilot association with regional chapters aimed at promoting flying as a career choice to young women) are good grooming platforms for young, determined women.

Besides the actions that women should take and mentoring and support from internal and external sources, improving the environment for gender equality must involve a cultural change at the highest corporate levels. Boards must be outspoken advocates for diversity and companies must develop clear policy guidelines on how to recruit, train, empower and retain more women at the technical and managerial level. Real change can only take place when the entire leadership is on board. Holding the organisation and individual leaders accountable for gender targets can be a powerful tool for change.