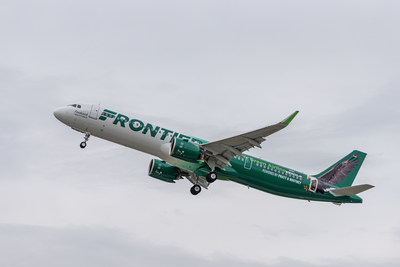 In recognition of the companies’ relationship, Frontier asked Pratt & Whitney employees to name the first three aircraft. The first plane was named “Frederick the Bald Eagle” in honor of the company’s founder Frederick B. Rentschler, recognizing the nearly 100-year history of the engine maker. The aircraft features Pratt & Whitney’s hallmark bald eagle on the tail and marks the first of 144 A320neo family aircraft – 134 purchased and 10 leased – for which Frontier has selected the GTF engine. In the coming months, Frontier will reveal two additional aircraft named after other Pratt & Whitney pioneers, each with its own unique tail design.

Rick Deurloo, president of Commercial Engines at Pratt & Whitney, joined Frontier President and CEO Barry Biffle, along with employees and distinguished guests, at Tampa International Airport to mark the occasion and the shared commitment to a more sustainable future.

“Our employees are the true trailblazers, who are committed to developing the transformative technologies that will allow the industry to achieve its commitment to net zero carbon emissions by 2050,” said Deurloo. “For the flying public, the Pratt & Whitney GTF engine means a focus on environmental responsibility with less fuel consumption, fewer emissions and lower noise – keeping fares low and contributing to quieter flights and cleaner communities.”

“We are thrilled to welcome our first A321neo, powered by Pratt & Whitney’s groundbreaking GTF engines, to the Frontier fleet,” said Biffle. “Frontier is already America’s Greenest Airline based on our young, highly fuel-efficient fleet, and these new aircraft will take us to the next level in terms of operational efficiency and a further lessening of our environmental footprint. The operational performance offered by these aircraft will generate savings that can be passed on to our customers, helping us continue to deliver on our mission of providing ‘Low Fares Done Right’ across America and beyond.”

Rentschler founded the Pratt & Whitney Aircraft Company in Hartford, Conn. in July 1925. He had a vision for viable commercial aviation: the best planes can only be built around the best engines. The company’s first product, designed by the end of that year, was an air-cooled, radial piston engine named the Wasp. The engine transformed the aviation industry and is the only aircraft engine to be designated an historic landmark to this day. The GTF engine extends Rentschler’s vision and spirit of innovation with its geared fan design. It has saved airlines more than 800 million gallons of fuel and over 8 million metric tons of CO2 since it entered service in January of 2016.

The Pratt & Whitney GTF™ engine is the only geared propulsion system delivering industry-leading sustainability benefits and dependable, world-class operating costs. It offers the greatest fuel efficiency and lowest greenhouse gas emissions for the Airbus A320neo family. GTF-powered aircraft reduce fuel consumption and CO2 emissions by 16% to 20%, NOx emissions by 50% and noise footprint by 75%.* Certified for operation on 50% sustainable aviation fuel (SAF) and successfully tested on 100% SAF, the engines are capable of further reductions in carbon emissions, which will help the aviation industry meet its goal of net zero emissions by 2050. The engine’s revolutionary geared fan architecture is the foundation for more sustainable aviation technologies in the decades ahead, with advancements like the Pratt & Whitney GTF Advantage™ engine and beyond. Learn more at pwgtf.com.

Pratt & Whitney is a world leader in the design, manufacture and service of aircraft and helicopter engines, and auxiliary power units. To learn more visit www.prattwhitney.com. To receive press releases and other news directly, please sign up here.